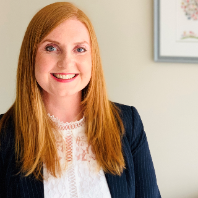 Kirsten is Programme Executive for Glasgow schools and is delighted to be onboarding schools in Glasgow to allow as many young people as possible to unleash their own unique skill sets. Having been an overtalkative irritant to many of her own high school teachers, she has a theory that sometimes a pupil's most annoying traits can be their superpowers - if channelled in a creative direction.

Kirsten comes to YES with a wealth of experience and sixteen years' experience of working in, owning, and running businesses within education. The teenager who had to sit at the front or back of most classes for talking too much has since been commissioned by many national organisations, including Education Scotland, to speak about and facilitate creativity, enterprise, and drama education.

She can often be found on the beaches of Ayrshire collecting sea pottery with her wee dog Harris and her dream is to fully embrace island life and live on the Isle of Arran.

Her career path has by no means been a straight one and has so far included working in pubs, hotels, insurance sales, a call centre, a ferry terminal, American & Welsh Summer Camps and a soft play centre. Her roles have so far included ice-cream seller, residential worker, university lecturer, cleaner, stand-up comedian, furniture painter, and mystery shopper.