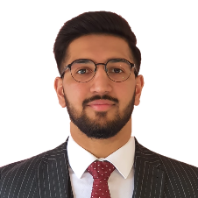 Osama is an Intern from the John Smith Centre's, Emerging Leaders Programme. He will be working closely with the team in order to gain an insight into the various work that we do, as well as public service in general.

Osama is currently in his final year of Law at the University of Glasgow, where he is studying Financial Law, United Nations Law, and Criminal Law. Osama has completed various work experience placements with the likes of RBS, HSBC, Pinsent Masons, the Scottish Courts and Tribunals Service and Peter Grant MP. Furthermore, he has also served as an MSYP, an MYP, as well as volunteered for several organisations including Govan Law Centre and the School Mock Court Case Project. Following his studies, he is set to commence a Traineeship with Baker McKenzie at their London office in 2023.

Osama enjoys debating and has taken part in several national and international mooting competitions. He has also tutored and helped young people at school to develop skills such as public-speaking and confidence. Osama also enjoys sports, regularly playing cricket and football.