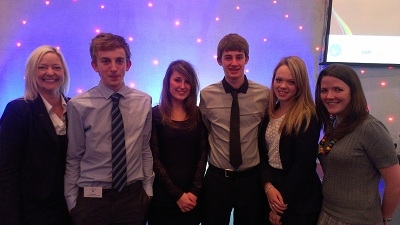 We were delighted when we heard we had been shortlisted for the Education Initiative of the Year for 2012's Herald Society Awards.

Hundreds of nominations were received for the awards and we made it to the last 3 for the accolade which recognises'innovative and inspiring work which can demonstrate tangible benefits for learners both and in and outside the classroom.'

The day was full of inspiring stories from keynote speaker Cormac Russell and other shortlisted nominees who came from a range of charitable organisations across Scotland.

While we didn't win the award, to be shortlisted amongst such an inspiring group was an honour and the judges 'commended YES for genuinely engaging with young people and encouraging the Scottish tradition of innovation'.

Marlyn Hosie, Senior Manager at Young Enterprise Scotland said, 'The EducationInitiative of the Year Award went to the HIVE project at Kilmarnock College.After the initial disappointment of not winning, and having a greaterunderstanding of the projects and people that were nominated for the awards, Iam really proud that we were nominated from the hundreds of applications theyreceived.'