With entrepreneurship being such a vague term, it's difficult to understand how being an entrepreneur can be so much more than "selling 'stuff'".

Officially, an entrepreneur is "someone who starts their own business, especially when this involves seeing a new opportunity".

The latest big name to be announced for our Festival is doing more than just selling his products, he has people all over the world hanging on his every word. 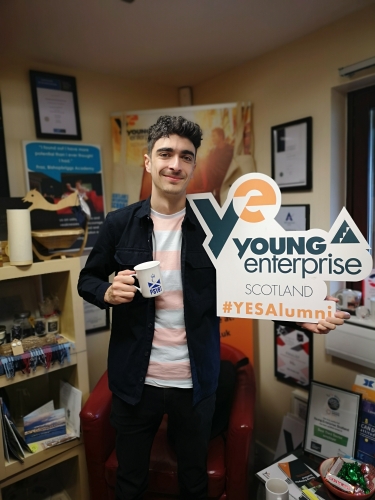 Chris McQueer has become synonymous with 'Scottish Twitter', somewhere where the humour is local and there are no-holds barred. Chris has become somewhat of a Twitter celeb in his own right, with his hilarious daily observations and insights into his life, such as his Megabus journey from hell which he kept followers updated on, and frequent check-ins with his 'dug' Timmy. From 'yer da sells Avon' to engaging with comedy accounts, anyone who isn't in 'the know' would be left perplexed. 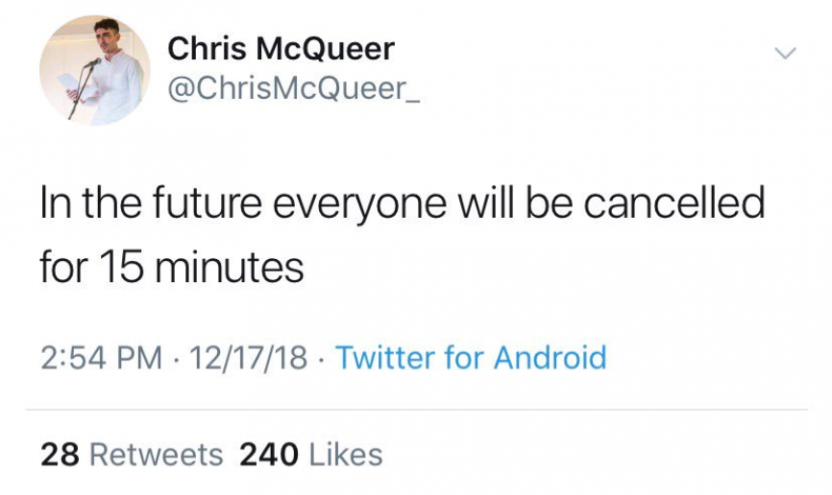 Chris became a sensation around 2016 when he began sharing his short stories online to his followers. Chris's stories give the insight to a mind that - one could say - is full of nonsense, but then, he could 'batter every one of us', so we wouldn't say that. 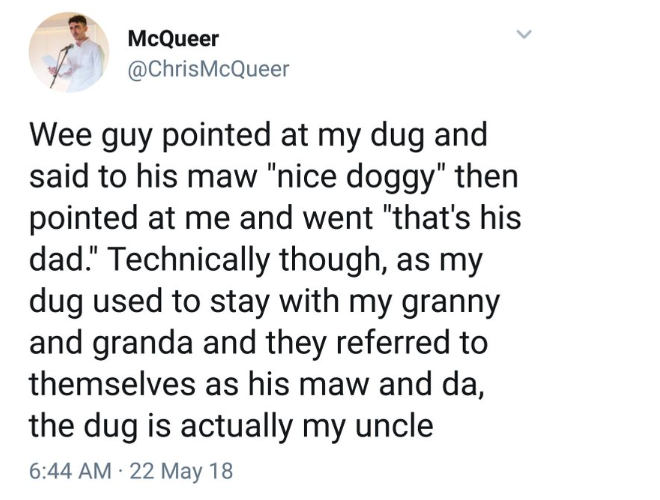 His quick wit quickly led to his follower count growing at a steady rate and has led to partnership opportunities, with him working with Tennents at 2018's Edinburgh Fringe Festival.

Tennents asked to work with me and we created a couple of videos where I interviewed American tourists and asked them to spell traditional Scottish words.

Chris's colloquial tweeting and writing has proven popular with young people across Scotland who, at any given opportunity, tweet him to reference his stories: 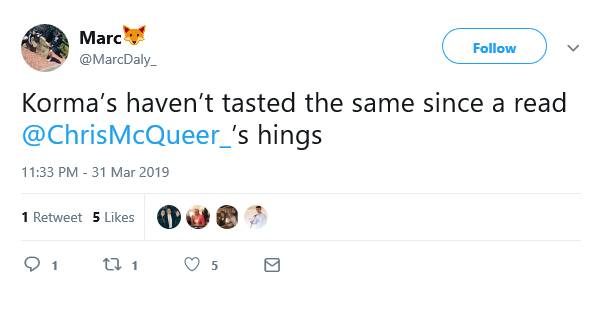 A YES Alumni of one of our shorter-lived programmes, Chris cycled through a variety of careers including shoe salesman, crime scene cleaner and barber.

However it came to a point where Chris realised that due to the nature of his audience, he could create a career from the tales that came so easily to him.

In 2017 his first collection of short stories 'Hings' was released on 404ink, the title giving a huge hint to the style in which his stories are written. He credits his own sharing of his short stories in blog form as the fuel for his sharing to grow exponentially. What really sets Chris apart from hundreds of other young authors is the attention to detail he includes in his stories without them becoming bogged down with jargon; such as his descriptions of the workings of the inner ear as told from the perspective of a moth; and the all-too-realistic conversations between characters in his books;

Brenda spat out some of the water she was drinking and wiped her chin. 'That was funny. Surely you have to respect the patter there? The guys ugly as sin, no offence. I just wanted to noise you up.'

Ahd be sittin oan buses an ahd hear folk say tae each other, 'How'd ye lose a single shoe? An it gave me a wee thrill. Knowin that they wurr laughin at mah work.

Sometimes he'd wake up to find that Senga had dressed him during the night. He woke up one day dressed in the suit he wore exclusively for funerals, prompting him to think for a minute that he'd died and was buried in the suit."

Surely it isn't as easy as sharing your stories on social media and then being picked up by a Scottish indie publisher?

I've actually been dead lucky with it all. 404ink were running a magazine and I'd submitted to them, so I got an invite to the launch. While I was there I asked whether they'd read my stuff as I really wanted to create what would eventually become Hings. They told me to send it over, and of course I didn't - I just thought they were trying to be nice! So they got back in touch with me looking for the stories and again I was just dead dubious, and here we are!

With becoming an Author one of the less common jobs that young people are moving into, we wondered whether that exact reason was a driving factor for Chris?

Aye, I felt like I was kind of spurred on by this. A lot of people thought it was risky - you just have to prove them wrong.

I think people think it's going to bring money in overnight. People think you're going to be the next JK Rowling, to an extent I did too. I realised quite quickly that I wanted to write full-time but I've been trying other things like spoken-word events. Basically I've been grafting however I can.

Chris, whose favourite creation is without a doubt his character Angie - featuring in both of his books - says that being a writer means you're never switched off.

My stories are a mix of made up and autobiographical. I take those stories you hear at all your family parties and just add something to them. I'm constantly looking, there isn't a point where I can turn off as I get ideas everywhere.

YE Scotland are thrilled to support Chris as he creates his own brand and carves his own career in today's changing employment landscape.

Chris will be coming to our Company Programme Finals at Edinburgh's Corn Exchange on 5th June and will be appearing in conversation with Graeme Easton.

And of course, he'll be his usual humble self.. 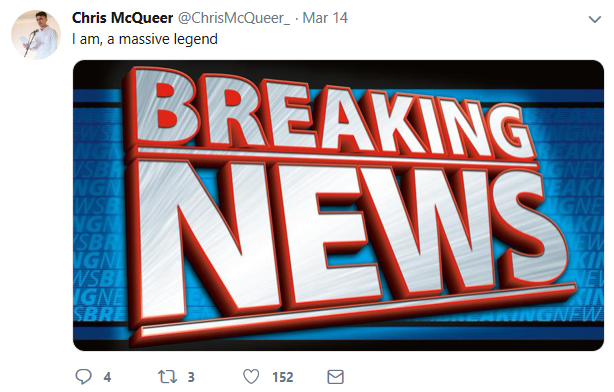