Earlier this year as lockdowns were enforced and young people were plunged into the unusual home schooling experience, one young person displayed a read entrepreneurial flair and launched her own business.

Evie Steel, from Kilmarnock, found that she ended up with far more time at home with her new puppy Dex and after finding a recipe in a magazine; decided to try baking her own dog biscuits. After convincing her mum to give her a hand, they sourced the ingredients and made a batch - he absolutely loved the peanut butter treats! Evie hatched a plan to sell these biscuits to other dogs after seeing home much Dex liked them. 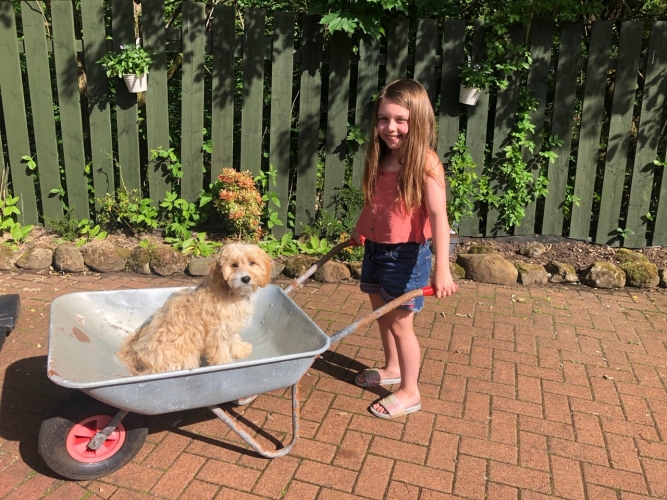 Evie with Dexter - the inspiration of Dex Stars

Evie has always been creative, she loves craft activities, designing, and making things. Alongside this, she's already shown a real passion for enterprise. At seven-years-old she worked with a friend to organise a charity disco. After convincing parents to help them, the girls hired a local venue, organised entertainment, food and drink, secured sponsorship from local businesses, and then managed to completely sell out their tickets raising £1500 for Children in Need.

Evie's mum pointed out that she's really confident speaking to adults and describing her ideas, which has been key to securing stockists for her dog biscuits to make the venture a success. As we love to highlight, the best way to develop enterprise skills is to learn by doing; Evie has had the opportunity to build these skills including her confidence and communication through her practical experience

Before commencing any venture, we encouraged Evie to understand whether it could be a business.

We helped her to weigh and measure ingredients and set her the challenge of working out unit costs per bag. It was clear that she could generate a profit margin, if she could manage to sell a few bags.

So, she started off with a batch and a handful of bags. But after a couple of Facebook posts she'd sold 1500 biscuits and had an approach from a local business to stock them in the first few days. This initial success helped her to roll up her sleeves and get baking more and more!

Evie created the recipe used in Dex Stars working alongside her Mum, who had been baking a lot of bread during the first few weeks of lockdown. They came across a recipe for dog biscuits in a magazine and decided to make some for their puppy, Dexter. Even before the baking had begun, Evie had it in her mind that other dogs would like the biscuits too and wanted to make a business selling them.

As luck would have it, the recipe made a few more than she had intended and so there was enough to try selling a few from an honesty box out on the street.

Since then, she has added another recipe to expand her range to two flavours - Peanut Butter Crunch using banana, honey and xylitol-free peanut butter; and Sweet Potato Crunch using sweet potatoes, banana and oats. 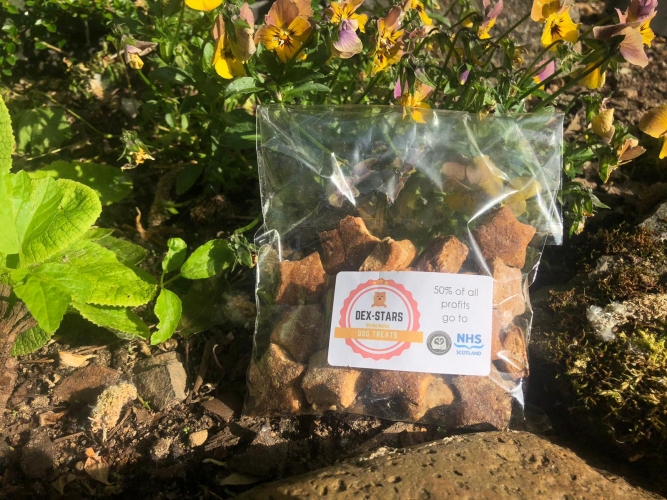 Evie created the branding and packaging for her business, working alongside her Dad to brainstorm ideas and using Canva for the design work. She wanted to come up with something that was personal, and she had already started cutting her biscuits using a star-shaped cutter so by merging the name of her puppy and the shape of her biscuits, the Dex-Stars branding was born!

The initial process didn't actually take too long, and she has since used the brand to carry through onto her packaging, signs, and social media account for the business. 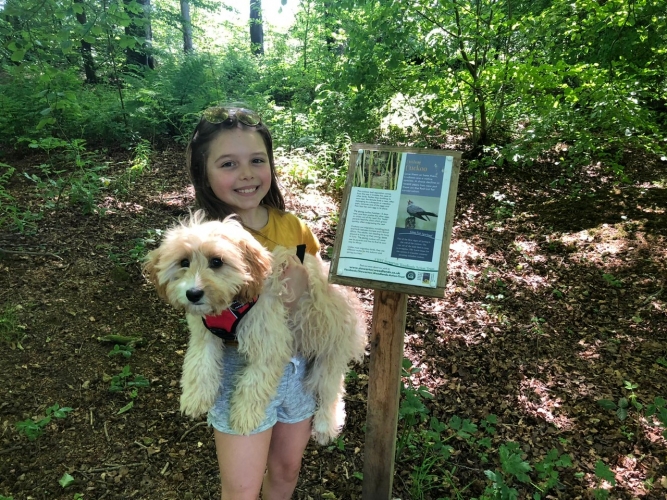 Straight away, Evie had a really clear idea of some businesses she wanted to approach to stock her dog biscuits. The businesses she chose were those who have been really active and community-minded during the lockdown period - Gilmartin's Bakery and The Sugar Cube in Stewarton. 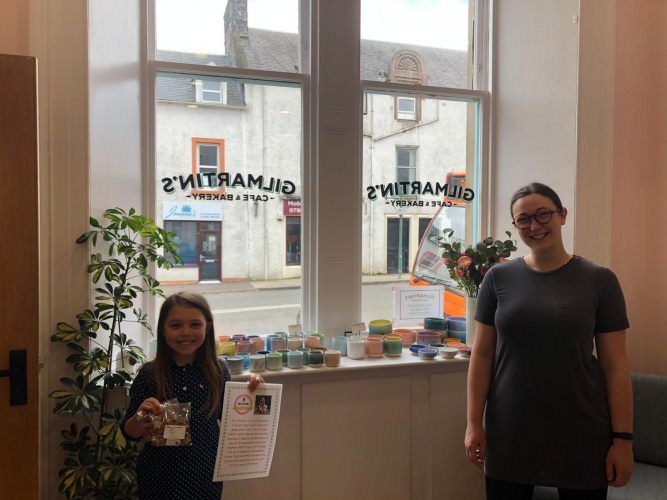 Both businesses have worked hard to diversify their offerings during the crisis, selling some of Evie's favourite things - tasty homemade bread, cakes, and fresh ice-cream. Evie felt that people might be interested in a treat for their dogs while picking up treats for themselves. We initially made contact with the businesses, but Evie met them (from 2m distance) to show them her dog biscuits. Both businesses were receptive to Evie, waiving any margin for sales, and Gilmartin's involved Evie in choosing where to display the products and added them to their online ordering system too.

More recently, she secured a third stockist - The Deli at One - and has her eye on approaching more.

Half of Evie's profits go to NHS Scotland and the Stewarton Woodland Action Trust; it's fair to say that Evie is quite socially aware.

Evie has definitely always been keen to make a difference.She has been involved with her Pupil Council at Nether Robertland Primary School, and as a member of the school's Eco Committee. At age 7 she worked with a friend to organise a family disco to raise funds for Children in Need. The event sold out, raising over £1500 for the charity in the process.

She was set in her mind from the outset of the dog biscuit business that she wanted to share profits with charities, and of course the NHS has done such incredible and high profile work over the past few months that this was front of her mind. She wanted to try and support something locally too, and she always sees signs around our town for the Stewarton Woodlands Action Trust (SWAT) - a group of volunteers who work hard to maintain paths,parks, and woodlands for the people and wildlife to enjoy. With restrictions on travel, these local paths have been more important than ever, and enjoyed daily by the community to walk dogs and exercise, so they became an obvious choice for her. 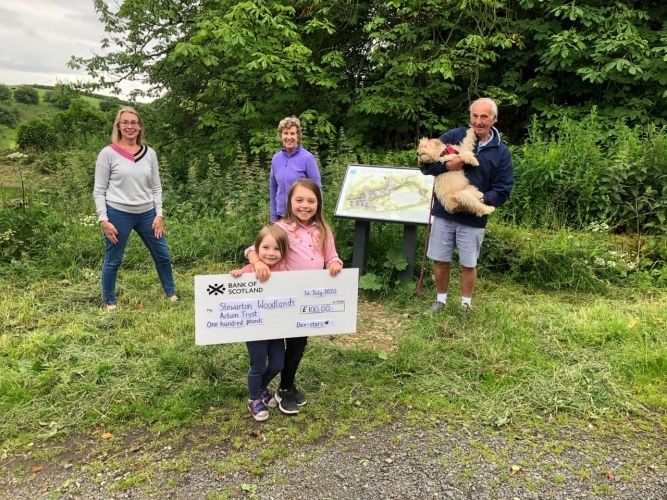 Evie met with three of the SWAT volunteers to hand over a cheque for £100 as the first of her profits made over the past few weeks. They were incredibly grateful to Evie, and it gave Evie a real sense of achievement to be able to meet some of the volunteers and to hear about some of their great work which her funds will help.

Dex Stars started as a "lockdown project" and we have certainly been taken a little bit by surprise at just how successful it has been; I think Evie has too. But the support from the local community has helped greatly to make it a success and given her the drive to work really hard to grow it further. Whether it goes further will be Evie's decision, but at the moment she wants to run it alongside school. She is already thinking of new products she can develop and has just agreed another new stockist in the past week too.

Maintaining her drive and passion for the project will be key to whether it continues. She is continually thinking of ideas to improve the business, but the production of the dog biscuits is certainly hard work. I think the thing that motivates her most is sharing her profits with charities and feeling that the hard work is making a difference and helping others too.If it continued to help other, we believe that she may well continue it well beyond this summer."

We are incredibly proud of Evie's hard work in setting up Dex-Stars. What started as baking a few treats for her puppy has grown into a really thriving enterprise because of her hard work and creativity. She has learnt lots of important lessons over the past few weeks and, whether she chooses to continue this long term or not, we're sure that some of those lessons will stick with her. The local community and businesses have been so incredibly supportive and take a lot of credit for embracing her and supporting her to make it a success, so we're also hugely thankful to them for helping to make sure that Evie will always remember the past few weeks so positively despiteall the chaos and tragedy of the pandemic.