In a world where more and more of us are working independently with an intent to set up our own businesses, it's great to see this beginning organically at a very young age.

Gone are the days of needing high class qualifications and degrees, the true requirements of a successful entrepreneur are determination,innovation and an understanding of your market.

Add in some bubbles, and you have ten-year-old Amelia; the (literal) brainchild of Smelleez. 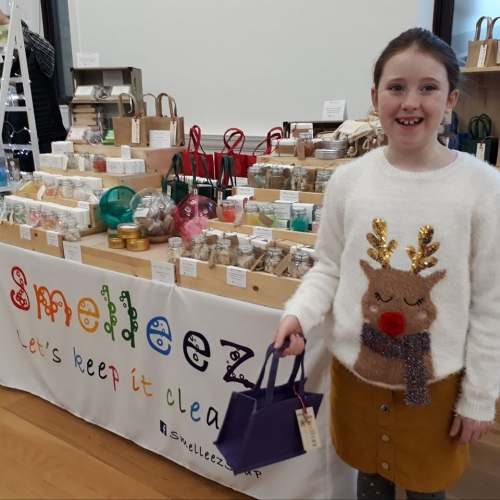 Strikingly, Amelia is the driving force in this small business, impressing her parents as she turned her small interest-free loan into product and profit in her first year of production and trading.

As both of her parents have always diverse interests, she's been involved from a young age and through watching and learning it's been a natural progression for Amelia to build up her own idea and receive the same level of support in return.

It's exactly the same process that both of my parents go through when they're working on one of their own projects - everyone has something to contribute and between us we have quite a diverse but useful skill set. We discuss what I want to do and then try to workout a way that I can actually do it.

Discussing my ideas with them helps me to work out more of the detail and they'll often ask questions that I hadn't thought of. Sometimes they even have quite useful suggestions! Of course, this creative process works better when assisted by lots of tea and cake!

She's a girl after our own hearts...

So, in a time of sweetie bouquets and dog-treat hampers; an entrepreneur as young as Amelia formulating her own soap range is quite a different endeavour. As with many young people who catch the entrepreneurship bug, it was a school competition that sparked the idea for her future success. 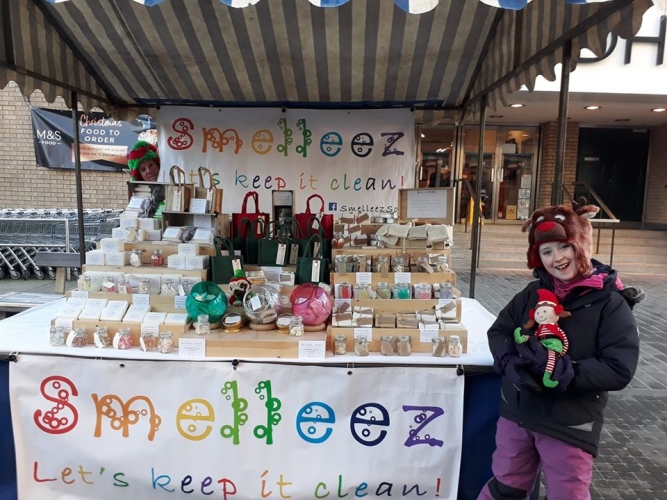 In 2017 there was a school competition for Young Entrepreneurs and the prize was a free place at the PTA Christmas Fayre. I had to devise a business idea and come up with a basic business plan which included a company name, details of what I would be selling, how it would be made and how much it would cost. Originally, I planned to make Lego shaped sweets(because I love Lego!) but then I had a last-minute change of mind and decided to make a range of Christmas scented soap because everyone needs to use soap and I thought that I would have a lot of customers.

I didn't have a clue how soap was made at that time and had to do quite a lot of research. YouTube and Google helped a lot and I also bought some books on soap making. Not everything went to exactly to plan and I did have some interesting experiences which is all a part of learning, and recognising what went wrong so that you can fix it for next time. Yes, you can make soap explode and yes, it does go a very long way! 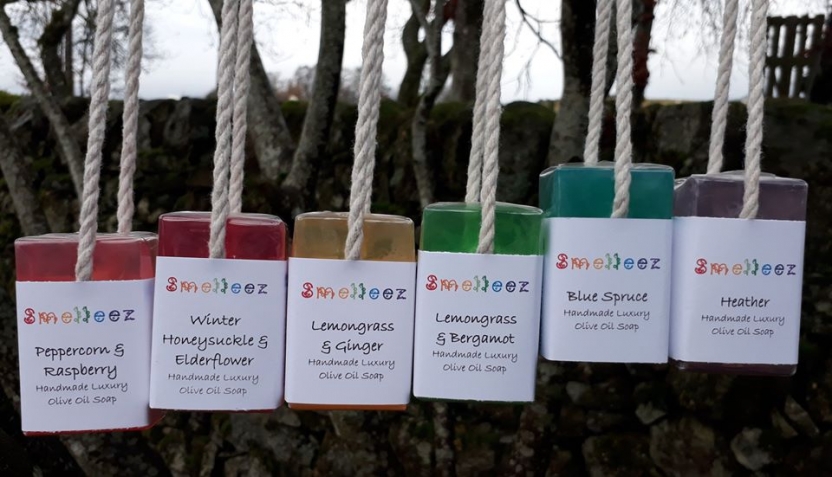 As well as formulating and designing each soap, Amelia has to submit each new product for a Cosmetic Product Safety Report which is a legal requirement for anyone to be able to sell soap. There are also lots of labelling and Trading Standard regulations that she must be compliant with, and this took a lot of time for her to research and make sure that she's in line with all of the current legislation.

And what about the length of time it takes from conception to having finished products ready to sell?

Some recipes are quite fast to devise but others take a lot longer to get right and the Cosmetic Reports usually take a minimum of 6 weeks but can be a lot longer.

Shampoo bars have been the most difficult thing to get right and I have been working on those for over a year. Trying to get the right formulation for different hair types and lengths has been quite tricky and for each new recipe I have to get people to test it out for me, get feedback from them, reformulate and go through the whole testing feedback cycle again before I can submit it for all of the relevant Cosmetic testing and reports.

At the core of Smelleez are a strong set of values with the mission of being both fun and environmentally friendly. After watching the Emmy and BAFTA winning Blue Planet, she learned about the huge problem that plastic microbeads were causing for the environment. 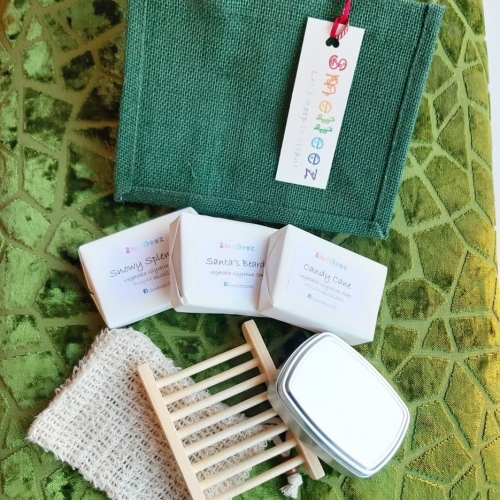 Basically, I raided the kitchen cupboards and devised soap bars which included things such as recycled coffee grounds, pepper corns, salt and sugar. My research showed that these everyday ingredients had a lot of useful skin benefits too. Happily, plastic microbeads have now been made illegal in cosmetic products.

I have worked really hard this year to make my packaging as environmentally friendly as possible. Traditionally, all the advice for wrapping glycerine-based soap is to use plastic. Even though bar soap uses a lot less plastic than liquid soap does I wanted to try and get rid of it altogether. This proved much more difficult than I expected, but all of my soap now comes in wrapping that is completely biodegradable and can either be recycled or composted.

I donate soap to Perth & Kinross Foodbank which helps raise awareness that they need more than food for their parcels.They are often short of basic toiletries to give out to people and I like to think that finding a bar of Monkey Farts! in the bottom of a bag might bring a smile to someone's face.

At YES we think that finding anything called Monkey Farts in a bag would make us giggle!

Amelia was fortunate enough to have a little amount of money from her parents to buy her initial ingredients and supplies she needed to get started, with them agreeing to as an investment in her future. The problem though with buying small quantities of ingredients and only replacing when sold is that the cost per item was a bit higher, but with some careful cash management she always stayed in the black.

My parents gave me an interest-free loan to pay for the very first Cosmetic Product Safety Reports and I repaid them at the end of my first year of trading. To allow Smelleez to expand last year I applied and was successful in obtaining a Micro-Enterprise grant from Perth & Kinross Council.

With a whopping 56 different scented soaps now in production, Amelia's newer range of dog shampoos is slowly building up with 6 variations currently approved; but she promises that she has a few new products in the pipeline for both people and their pets.

With 56 different scents it must be pretty difficult to choose one favourite, she does have a few that she comes back to again and again such as Bakewell Tart - currently though, she's been testing out a couple of new products which aren't available for sale just yet.

Something that has surprised her is the popularity of her dog soaps, the initial interest for these came from customers who had used her products querying whether or not they could use them on their pets as they were keen to use something that wouldn't dry out their skin and make them itchy. Amelia currently has lots of repeat customers for dog soap and finds that her brand has been spreading through word of mouth.

Dog owners will often choose the bar that they want for their pets before they pick one for themselves or their partner - this is especially true at Christmas and quite a few doggies got Santa Pawz! or Candy Canine! in their Christmas stocking this year. 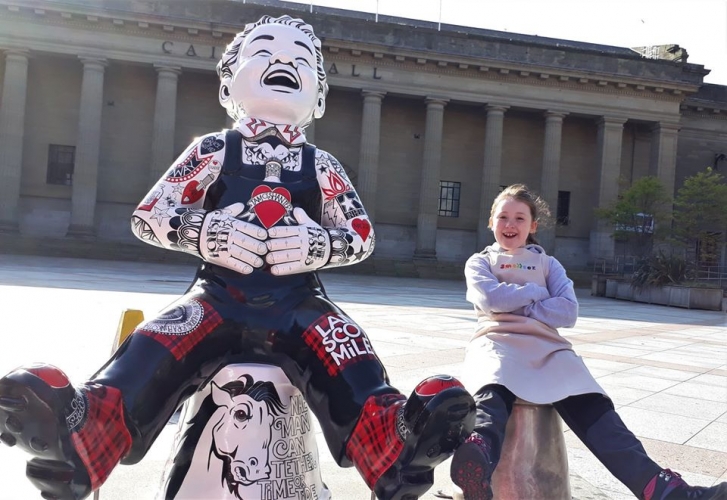 With her enterprise being so hands-on, we wondered what it was like for her juggling so many different things, and whether it got in her way with friends and school;

Lots of people have hobbies that take up time. Some of my friends have things such as football, dancing or horse riding on the weekends - I have markets.

I did feel a bit sad that I wasn't able to go to my Cubs fundraising race night because I was attending the Courier Business Awards on the same evening. It's a bit weird that when my friends are talking about what they're doing over the summer I'm thinking about Christmas!

Last year, Amelia won the Rising Star award in the Courier Business Awards which was massive for her!

I had decided that I would grow Smelleez but 2019 was so much bigger than I expected!

It was lovely to be awarded Growbiz Young Entrepreneur of the year last January which gave me the confidence to apply for funding to expand. Being named in the Courier Impact 100 was a huge surprise and getting Kaye Adam's autograph after she interviewed me live on BBC Radio Scotland was another highlight.

In among her business venture, she also managed to squeeze in a trip on the Caledonian Sleeper to Warner Brothers Studio in Watford, she said that she was thrilled to be able to as a massive Harry Potter fan!

Her range hasn't gone unnoticed, she was invited to supply Dundee's first Zero Waste shop, the Little Green Larder which has given her the opportunity to expand her customer base and raise her profile.

There are already new products in the pipeline and I keep getting asked to do more and more things.

I enjoy attending markets and events and want to do more of these going forward. I would also like to be stocked in more shops and I'm already having several discussions about this. I think that I might need to have some form of online shop this year as so many people beyond my local area are now interested in buying my soap.

I'm starting to outgrow the kitchen and will have to look at how I can scale up to increase production which means I'm having to think about what I could outsource and how I can get others to do some of the work so that I can balance Smelleez with the rest of my life and keep it fun! 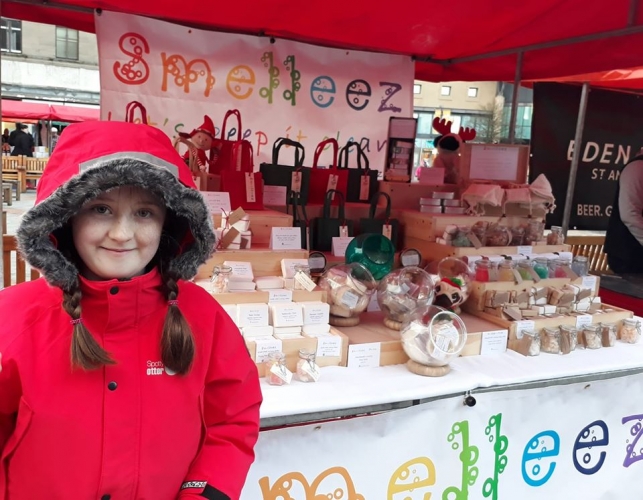 It certainly sounds like Amelia has put some serious thought into this, and we absolutely cannot wait to see what this fabulous young entrepreneur comes up with next!